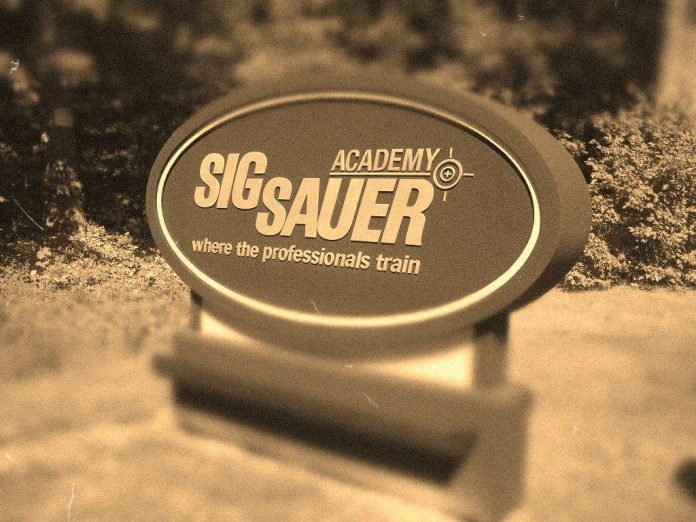 In the late 1980s, the concept of a training Academy began in a conversation between SIGARMS executive management and several officials from federal agencies. At the time, there was a strong need for a dedicated training outfit to facilitate armourer, firearms transition, and instructor training for agencies converting from revolvers to semi-automatic pistols. The original goal for the Academy was to construct a facility similar to the FBI Firearms Training complex, but available to all law enforcement and military entities in the United States. Some of the requirements included an indoor range, a Hogan’s Alley complex, multiple ranges for handguns and long guns, state-of-the-art classrooms to complement the ranges, and lodging facilities for the visiting students. In addition to the training ranges, there would be a research and development branch, underground test range, weapons repair, and armourer classrooms.

In 1990 SIGARMS moved its headquarters from Herndon, Virginia to Exeter, New Hampshire. The SIGARMS Academy was officially launched under the direction of Bank Miller, Jim Fry, and George Harris, and a search for property large enough to house the Academy was initiated. In the meantime, the SIGARMS Academy occupied one quarter of the 80,000 square foot building that had become the new home of SIGARMS in Exeter. Classes were continuously conducted at the factory as well as in the field throughout the United States by the staff and a growing number of adjunct instructors.

In 1996 SIGARMS Academy took ownership of a large parcel in Epping, NH and the first ever non-toxic, frangible indoor range was built along with two classrooms, a gun vault, and administrative areas.

While it was never true that the Academy’s customers had to own or be issued SIG brand products in order to attend classes that misconception seemed to live in perpetuity. In fact, one of the mottos of the Academy established by SIGARMS, continues to the present, “No matter what firearm you shoot, we’ll make you a better shooter, guaranteed.”

In 2001 SIGARMS Academy hit another milestone by introducing specialized civilian training for select organizations and businesses. Shortly thereafter, the demand from the civilian population grew and the Academy audience became Armed Professionals and Responsible Citizens. The Armed Professionals were defined as anyone who is paid to be armed in the performance of their jobs. The Responsible Citizen is defined as anyone who can legally possess a firearm. The major difference between the two is in regard to the tactics and disposition of an armed encounter. The Armed Professional is responsible to contain, control, and render proper dispensation of an armed confrontation in their jurisdiction. The Responsible Citizen has no responsibility as such and is encouraged to disengage from an armed confrontation when possible, but be prepared to act in a lethal manner when no other option is available.

In 2006 the Pro Shop was established, and in 2007 obtained their own FFL to sell SIGARMS firearms.

In recent years, SIG SAUER Academy has continued to develop a variety of ranges and infrastructures including a maritime training area, a tactical training area, multiple shoothouses, the only publicly accessible 1000 yard range in the New England area, and a 360 degree range. Additionally, in 2012 the Academy invested in a brand new home for the SIG SAUER Academy Pro Shop that displays the entire line of SIG SAUER firearms and expanded its coverage of accessories and products with vendors that represent the best of the industry merchandise.

The four SIG principles are: