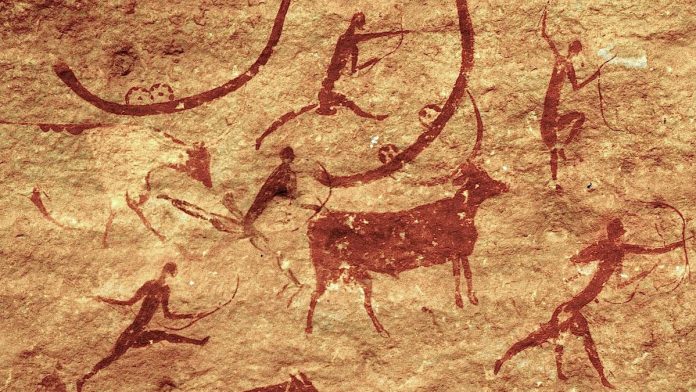 Hunting has a long history.
It pre-dates the emergence of Homo sapiens and may even predate genus Homo.

The oldest undisputed evidence for hunting dates to the Early Pleistocene, consistent with the emergence and early dispersal of Homo erectus, about 1.7 million years ago (Acheulean).
While it is undisputed that Homo erectus were hunters, the importance of this for the emergence of Homo erectus from its australopithecine ancestors, including the production of stone tools and eventually the control of fire, is emphasised in the so-called “hunting hypothesis” and de-emphasised in scenarios that stress omnivory and social interaction.

Stone spearheads dated as early as 500,000 years ago were found in South Africa.  The earliest dated find of surviving wooden hunting spears dates to the very end of the Lower Paleolithic, just before 300,000 years ago.The Schöningen spears, found in 1976 in Germany, are associated with Homo heidelbergensis.

Hunting was a crucial component of hunter-gatherer societies before the domestication of livestock and the dawn of agriculture, beginning about 11,000 years ago in some parts of the world. In addition to the spear, hunting weapons developed during the Upper Paleolithic include the atlatl (a spear-thrower; before 30,000 years ago) and the bow (18,000 years ago). By the Mesolithic, hunting strategies had diversified with the development of these more far-reaching weapons and the domestication of the dog about 15,000 years ago. Evidence puts the earliest known mammoth hunting in Asia with spears to approximately 16,200 years ago.

Hunting most commonly done by humans for food, recreation, to remove predators that can be dangerous to humans or domestic animals, or for trade. Lawful hunting is distinguished from poaching, which is the illegal killing, trapping or capture of the hunted species. The species that are hunted are referred to as game or prey and are usually mammals and birds.

Hunting is deeply embedded in human culture. Hunting an animal for its meat can also be seen as a more natural way to obtain animal protein since regulated hunting does not cause the same environmental issues as raising domestic animals for meat, especially on factory farms.

Hunting can also be a means of pest control. Hunting advocates state that hunting can be a necessary component of modern “Wildlife Management“, for example, to help maintain a population of healthy animals within an environment’s ecological carrying capacity when natural checks such as predators are absent or very rare.

Excessive hunting has also heavily contributed to the endangerment, extirpation and extinction of many animals.

The pursuit, capture and release, or capture for food of fish is called fishing, which is not commonly categorised as a form of hunting. It is also not considered hunting to pursue animals without intent to kill them, as in wildlife photography, birdwatching, or scientific research activities which involve tranquilizing or tagging of animals or birds. The practice of foraging or gathering materials from plants and mushrooms is also considered separate from hunting.

Federation of Associations for Hunting and Conservation of the EU (FACE)