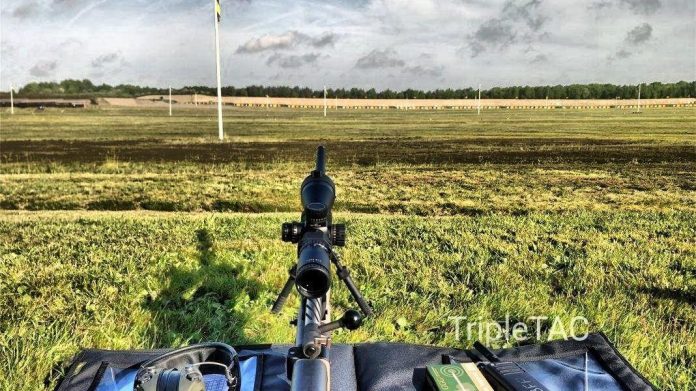 During our visit to NRA UK shooting range in Bisley, we had the chance to use a custom-built rifle made in Germany
Walküre (Or as it is known in the UK as NIMROD) is a precision rifle made in Bavaria, Germany. The owner and founder of AS.H is Andres Schuler a very well-known gunmaker and inventor in Germany. Their flagship is a self-constructed Precision Rifle gun (PSG) Valkyrie (in the UK called Nimrod).

They incorporate a self-developed system when designing this rifle, decided to make this compatible in important areas with the Remington 700 system. They have paid attention to compatibility, especially in the interface shaft system, shanks, magazines and prints. However, they integrated the recoil cleat into their system at the interface shaft system in order to meet the exact requirement for precision.
It comes with an integrated 0 MOA Picatinny rail which is part of the action. The action is fashioned from tool steel that has a tensile strength of 1200N/mm2 and is then gas nitride finished with a phosphate and polyurethane coating.
The bolt action uses a 3-lug operating system that locks into a central action ring embedded into the action body.
Each lug is 0.54” long and 0.35” wide and offers near 100% contact when engaged, which certainly aids accuracy.
It has a 60° bolt lift and is 7” long with a solid 0.84” inch O/D, with nine radial flutes to reduce bearing surface and to reduce any unwanted binding due to debris falling on to the action. These are shallow and blacked inside to contrast with the polished bolt body.
The barrel is a stainless steel match grade famous German-made Lothar Walther (same as A.I )

We tried Nimrod in 2 calibres (.300 Win Mag and .308 Win), the 300 Win Mag had an AX AICS chassis in NRA UK Century Range at a distance of 600 yards. First, we needed to do special zeroing procedures in Zero Range using a specific HME target, because of 300 Win Mag Muzzle Energy to meet the Bisley range requirement (.338 calibre HME rifles were not allowed on any of the NRA UK ranges in Bisley due to Range Danger Area and Air Danger Height requirements, which exceed the available range safety template and air danger height).

We had one .308 in AT AICS (which had a Canadian-built two-stage trigger from Cadex Defence), we used Accu-Shot Atlas Bipod V8, the scope mounts were American Defense AD-DELTA 20 MOA 1 Piece Quick Detach Unimount (as Nimrod got a FALT Picatinny rail which is a part of the action itself), the scope we use was Athlon Ares BTR 4.5-27×50 APLR3 FFP IR MOA.
Apart from AICS chassis, Nimrod can slip into other aftermarket stocks due to the Remington 700 action underside profile, it can come in PSE composite stocks from Cork, Ireland and GRS rifle stocks from Hornindal, Norway.

The 3-position firing pin safety is somehow similar to Accuracy international 3-position safety, but note that it is not exactly as it is difficult to find the middle position, also the bolt opening to access the firing pin is not as simple and straightforward as Accuracy International, because it’s seating on the ACIS chassis the magazine is single stack instead of the AI original Double stack.

Sporting Services imports this rifle from AS.H in Germany into the UK under the name of NIMROD.